After reading a tweet my friend Zauber put up a few hours ago, I decided to download and attempt to play Blue Mars in Linux via a beta of Wine v1.2. After the quick registration and activation, I downloaded and ran the Blue Mars installer.

The install went without a hitch. I launched the desktop link to Blue Mars, halfway expecting it to bomb out, like when I tried to run the There.com client a while back. To my surprise, I got the login screen working great.

I login, choose to download Caledonia, restarted the client as instructed, clicked go and then... 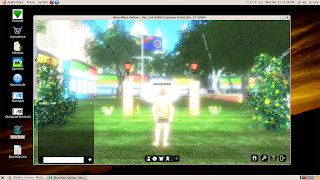 It works pretty well, as you can see, but there's a big problem here: it's too damn glowy for me to use. It's like Windlight on crack.

To be sure, the glow is due to Wine's DirectX incompleteness, but it's enough of a turn-off to keep me away from Blue Mars unless they make a Linux client, or the Wine developers work to make Blue Mars visually comfortable for my eyes.

Note: Before anyone suggests it, let me state for the record that buying a copy of Windows 7 at $200 USD just to play a game is incredibly stupid, IMHO. Between SL, my XBox 360 and soon a PlayStation 3, I'm perfectly sorted in the gaming department.

<rant>
Yesterday I checked up on the Commerce Forums to see if anything hopefully interesting or positive was being discussed. What I found was something absolutely disgusting: A merchant championing the total abolishment of Basic accounts and "No Payment Info On File" account status under the paper-thin guise of content protection.

This is another example of the elitist attitude that has been boiling over in the Commerce Forums since the XStreetSL listing taxes announcement. While the OP of that thread got tremendous and firm pushback, it has emboldened some to suggest other economically destructive ideas such as requiring a premium account to be able to sell things, and even creating a separate grid for free accounts.

This elitist hate of Basic accounts has to stop. Now. It is ill-conceived, misguided and ultimately destructive.

What the elitists fail to see is that Basic(and NPIOF) membership is what gets people into SL, as it's the easiest point of entry to a virtual world compared to some competitors, and as a result Basic accounts are extremely vital contributors to the economy(Hint to elitists: In other words they are your customers). The Premium account status is a carrot-and-stick proposition for Basic residents who want some relatively small perks(not counting Linden Homes) in exchange for a recurring fee to the Lab. Lording premium status over the entire grid will result in an economic disaster that will see Second Life crumble faster than the current XStreetSL exodus, leaving only the few elitists left to wonder what went wrong.

Nobody who loves SL(including the elitists) would want that to happen, but that is the direction this movement is pushing the Lab. The only way to stop it is to vigilantly keep pushing back until the elitists give up. So keep on pushing back, folks. Stand up for your right to be Basic and proud!(Disclaimer: I've been a Premium account for over 3 years, but I stand with many of my friends and customers who are Basic accounts as I know they are the heart and soul of SL, as Prokofy eloquently put it.)
</rant>
at December 20, 2009 4 comments:

Earlier today, Facebook and it's users suffered an hours-long outage in which a recently pushed update caused a DNS misconfiguration. As...