October 04, 2021
Earlier today, Facebook and it's users suffered an hours-long outage in which a recently pushed update caused a DNS misconfiguration. As a result, all of Facebook, Instagram, WhatsApp and even Oculus were essentially unreachable, leaving users to wait it out or use other social media sites. The problem was rather hilariously compounded by the fact that Facebook's physical access system ran through those same misconfigured DNS routes, so employees couldn't use their badges to enter the building, and those who were already inside couldn't get to certain necessary places due to the now inoperable access system. While I'm sure the building security team at Facebook has already figured out a solution to the access system problem, I've been thinking how the "Facebook is down, so I'll just go to Twitter or TikTok or some other place" problem could be addressed insofar as keeping Facebook friends connected and communicating with each other without having t
Post a Comment
Read more

New blog up and running!

April 13, 2012
Just a heads up to those who may be interested: I have a new blog up, where I will be focusing on issues pertaining to atheism, secularism and some science. Check it out at The Misfit Atheist .
Post a Comment
Read more

November 30, 2011
The day before Thanksgiving, I had found a great deal on something I had been pining to get ever since my cousin got one: an ebook reader. Now, I had ebook reading apps on my Android phone and Linux desktop, but the phone's screen is too small for proper book reading compared to tablets and ereaders like the Kindle. So I was stoked to find that Dollar General was selling this ebook reader for a jaw-dropping $50 on Thanksgiving Day only(I should have waited a week as it's now $45 for Christmas). So I ordered it online on Thanksgiving and received it in the mail on Monday. After fiddling around with it a bit, I figured out how to add ebooks to it via USB to my Linux desktop PC. An easy affair, but today I wanted to give the Kobo bookstore a try, since the ereader's maker claimed that it worked with Kobo. Unfortunately, Kobo failed me here. It turns out that Kobo follows the "iTunes/iPod" model when syncing to ereaders that lack internet capability. The ereader
3 comments
Location: New Jersey, USA
Read more 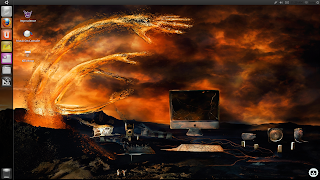 A while back I gave a pretty harsh review of Ubuntu Natty Alpha 1, to the point where I basically ran back screaming to Maverick Meerkat. Well, as I promised in the comments, I've given it another shot with the latest alpha release. The short review is this: Unity has progressed nicely, but still needs some polishing work, and be prepared for quite a few desktop workflow changes. Unity: Almost there Unity desktop on Alpha 3 Unity has definitely come a long way since Alpha 1 tortured me to death, but it still isn't quite polished enough for me to use as a decent desktop. But still, there's a lot improvements worth talking about. First, all the desktop launchers I had on my ~/Desktop directory no longer clutter up Unity's sidebar, although it's not immediately apparent how I can go about adding a launcher to it if I want to. When you launch an application like Firefox, you'll notice something quite jarring at first but makes sense given Canonical's re
Post a Comment
Read more

Puppy Linux: A distro well-suited for a portable Second Life®

February 20, 2011
A couple of days ago I stumbled upon an old Lifehacker article about Linux distros that can be run from a USB stick. The author of the article wound up favoring Puppy Linux as the best of the bunch. While I've had a go-round with Slitaz Linux before, it still seems too svelte to be a decent USB distro. So I downloaded the latest stable release, burned it to CD, booted it up and installed it to my flash drive. After a quick change to my desktop's boot sequence via BIOS, I booted my new Puppy flash drive for the first time, greeted by a desktop similar to the screenshot on the download page. Once I answered a few simple questions(video resolution, date/time zone, etc.) I immediately went to the "browse" icon on the desktop. On first click, a window popped up giving me a choice of web browsers to download and install(Dillo is included by default, but is like ELinks wrangled into a GUI). I picked out the latest stable Firefox release, and restored all my bookmarks
2 comments
Read more 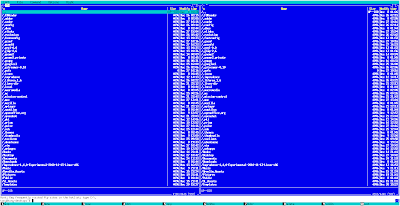 In my last post, I detailed the horrific digital aftermath of what happened after I had tested out the Ubuntu Natty Alpha 1 release. In short, I was left with a system that refused to boot into a graphical environment at all and was forced to use the command line to do several tasks that would normally be done in a GUI. I was so surprised at how remarkably easy it was to do these tasks(web browsing, torrent downloading, CD burning) on the command line, I announced my intention of going completely GUI-less for two days. While the "recovery console" session option found in the GDM login screen would be the closest replication of my X-less ordeal, I found that the xterm window it had was too small to show in snapshots. I decided to log into Gnome, but work solely within a maximized xterm window(alternatively you can use gnome-terminal and toggle full-screen with the F11 button). Here are the following applications I've used so far, grouped together according to general ta
Post a Comment
Read more

December 08, 2010
Yesterday, I blogged about the current shortcomings of the Unity desktop environment. What happened afterwards, however, is a horror story with a valuable lesson learned, and also something of a testament as to why the *nix command-line still rocks hard. The problem started when I noticed that Totem and MPlayer started acting weird. When playing a video, the colors were screwed up. But it was kinda funny how people in videos looked as blue as the Smurfs(I now regret not taking a screenshot when I had the chance). So I thought "Maybe I'll check the repositories to see if there's any updates that could fix this". So I fired up update-manager, and sure enough there were a lot of updates. I proceeded to install them all, thinking it would fix the movie problems and maybe pull in some improvements to Unity too. After the slightly lengthy download and install process, I was instructed to reboot the machine. On reboot, instead of seeing the familiar GDM login screen, I
2 comments
Read more
More posts